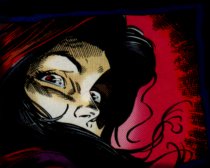 She’s been many things in her life. Butt-kicking mercenary, loyal friend and comrade, super-hero, and just a girl you don’t want to mess with. Fans have been waiting for quite some time to get more Domino, and thanks to writer Joe Pruett, and artist Brian Stelfreeze, fans will finally get their chance.

X-Fan recently caught up with Stelfreeze to talk about the long-awaited mini-series and to see just where the chips are going to fall for the deadly Domino.

“It makes it feel real, in a way,” said Stelfreeze, commenting on how long it has taken for the book to come out. “I've been working on this on and off for a good little while now, and its almost felt like I've been keeping a secret, but now everyone knows. It's exhilarating, but a little scary at the same time.”

Some of the decisions during the early planning stages were to tweak Domino’s look and to upgrade her for a more modern audience. “Domino was a '90s superhero fashion victim. Her costume seemed a little... actually a good bit too impractical and fleshy for a covert operator. I decided to scale her back,” Stelfreeze said.

“The nice thing about Domino is that she's completely recognizable by the spot on her left eye,” Stelfreeze said. “Even in jeans and a T-shirt, she still looks like Domino.”

“This gave me a lot of room to play. I wanted to put the emphasis more on the character and not necessarily the costume. The first order of business was to get away from colors. I knew that colors would play an important part in this series, so I wanted to keep her costume neutral. This would give me the luxury of pushing her into any color composition. With the exception of all the "stuff," I really like the basics of the Rob Liefeld design {Liefeld created the character for the now-cancelled/revamped X-Force series,” Stelfreeze said.

“I used that as my starting point. Thinking in practical terms, I felt her costume should be a combination of athletic wear, and paramilitary web gear. I also decided to scale back on the character physically, making her generally smaller in appearance. It just seems more impressive for a small damsel to kick large butt,” Stelfreeze said.

Stelfreeze commented that one of the main reasons he took this book is that he was given an extraordinary amount of freedom from Marvel to explore his talents as an artist.

“Lysa Hawkins (who is now at DC comics) allowed me to pencil, ink, and color this series. She even greenlighted painted covers, and gave me my choice of letterer. Of course I picked the incomparable John "The Fist" Costanza,” said Stelfreeze.

“For years I wanted to do a book or miniseries at DC this way, but it never worked out. I could think of the project holistically, as an entire work. I didn't have to worry about making my pencils clear enough for an inker, or describing every shadow for a colorist. This allowed me to work closer, in methodology, to the way I paint. I didn't feel I had to finish things at every stage of the process. This alone almost completely changed my drawing approach for the series,” Stelfreeze said.

Another factor for Stelfreeze was that he was able to work in a lot of speed and action. Something that would capture the “kinetics of the series.”

“I brought in a little Japanese animation influence, and went a little more caricatured with my figures. I also started reducing information. Information and detail in artwork seems to slow a reader down, and the more of that you have slower page feels. I tried to cut out as much superfluous rendering in the line art stages as possible, saving it for the coloring stages. I wanted to go for something simple, fast, and effective. This is quite different from how I approach my cover work,” Stelfreeze said.

Stelfreeze had nothing but praise for writer Joe Pruett. “Working with Joe's like working with my brother. He lives about 20 minutes away, and it was great having face-to-face talks about what we wanted to achieve here. Joe is a great writer to work with, and we've talked about getting together again. He's got some sweet ideas that I think really sing,” Stelfreeze said.

Domino #1 is currently scheduled to go on sale in June.